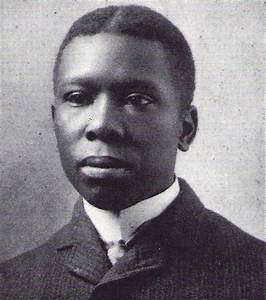 Born on June 27, 1872, Paul Laurence Dunbar was one of the first African American poets to gain national recognition. His parents Joshua and Matilda Murphy Dunbar were freed slaves from Kentucky. His parents separated shortly after his birth, but Dunbar would draw on their stories of plantation life throughout his writing career. By the age of fourteen, Dunbar had poems published in the Dayton Herald. While in high school he edited the Dayton Tattler, a short-lived black newspaper published by classmate Orville Wright.

Despite being a fine student, Dunbar was financially unable to attend college and took a job as an elevator operator. In 1892, a former teacher invited him to read his poems at a meeting of the Western Association of Writers; his work impressed his audience to such a degree that the popular poet James Whitcomb Riley wrote him a letter of encouragement. In 1893, Dunbar self-published a collection called Oak and Ivy. To help pay the publishing costs, he sold the book for a dollar to people riding in his elevator.

Later that year, Dunbar moved to Chicago, hoping to find work at the first World’s Fair. He befriended Frederick Douglass, who found him a job as a clerk, and also arranged for him to read a selection of his poems. Douglass said of Dunbar that he was “the most promising young colored man in America.” By 1895, Dunbar’s poems began appearing in major national newspapers and magazines, such as The New York Times. With the help of friends, he published the second collection, Majors and Minors (Hadley & Hadley, 1895). The poems written in standard English were called “majors,” and those in dialect were termed “minors.” Although the “major” poems outnumber those written in dialect, it was the dialect poems that brought Dunbar the most attention. The noted novelist and critic William Dean Howells gave a favorable review to the poems in Harper’s Weekly.

In 1898, Dunbar’s health deteriorated; he believed the dust in the library contributed to his tuberculosis and left his job to dedicate himself full time to writing and giving readings. Over the next five years, he would produce three more novels and three short story collections. Dunbar separated from his wife in 1902, and shortly thereafter he suffered a nervous breakdown and a bout of pneumonia. Although ill, Dunbar continued to write poems. His collections from this time include Lyrics of Love and Laughter (Dodd, Mead and Co., 1903), Howdy, Howdy, Howdy (Dodd, Mead and Co., 1905), and Lyrics of Sunshine and Shadow (Dodd, Mead and Co., 1903). These books confirmed his position as America’s premier black poet. Dunbar’s steadily deteriorating health caused him to return to his mother’s home in Dayton, Ohio, where he died on February 9, 1906, at the age of thirty-three.


I know why the caged bird beats its wing
Till its blood is red on the cruel bars;
For he must fly back to his perch and cling
When he fain would be on the bough a-swing;
And a pain still throbs in the old, old scars
And they pulse again with a keener sting—
I know why he beats his wing!