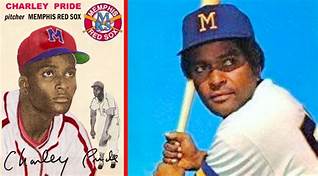 In the early 1960s, a young minor league baseball pitcher and aspiring country singer named Charley Pride had settled into a discouraging routine. His days were spent toiling in Helena, Mont., at a smelter operated by the Anaconda Copper Mining Co., and he spent his free time playing for its semipro baseball team, the East Helena Smelteries.

He stood out as an African American working in a musical genre that seldom welcomed black voices. But he developed a small but enthusiastic fan base singing in Montana honky-tonks, which in 1962 led to his invitation to perform before a show headlined by country singers Red Sovine and Red Foley.

After Mr. Pride sang “Heartaches By the Numbers” and “Lovesick Blues,” Sovine, a veteran performer, was struck by Mr. Pride’s magnetism and the enthusiastic response he evoked from the White audience. He suggested that Mr. Pride take his chances in Nashville.

It took him nearly two years to get a contract. Record executives loved his demo tapes but got cold feet after viewing his picture. In one audition, he was told, “Now sing in your regular voice.” A talent scout even suggested that Mr. Pride sell himself as a novelty by dressing in Colonial garb and adopting the stage name of George Washington Carver III. Finally, country guitarist Chet Atkins, who was also an RCA Records executive, saw promise in the singer.

Radio stations received his first singles, credited to Country Charley Pride, without publicity photos — a cautious move by Atkins. Disc jockeys latched onto the records, and country fans listened. “It was RCA’s decision not to play up or down the color thing, but to just let the voice go, put the record out, and let the people decide,” Mr. Pride later told The Washington Post.

Mr. Pride, who grew up in the Mississippi cotton fields and became the first major African American singing star in country music, died Dec. 12 at 86 in Dallas. The cause was complications from covid-19, the disease caused by the coronavirus, according to a statement from the Nashville public relations firm 2911 Media.

Harmonica player DeFord Bailey, who was black, had been one of the earliest and most popular cast members of the Grand Ole Opry in the 1930s. A generation later, soul stars Ray Charles and Solomon Burke recorded country songs. But Mr. Pride shattered a show-business barrier, paving the way for subsequent black entertainers — Stoney Edwards, Big Al Downing, and Darius Rucker, among them — who followed Mr. Pride’s lead in Nashville.

“He would make jokes to audiences about having a ‘permanent tan,’

” Kienzle said. “The music won out over any bigotry.”

He often turned down songs that he believed were too controversial. One such song, “Blackjack County Chain,” by songwriter Red Lane, recounted a chain gang beating a sadistic sheriff to death. After Mr. Pride rejected it, his frequent touring mate, Willie Nelson, later recorded it.

Mr. Pride often endured cruel jokes and taunts from fellow entertainers. George Jones once drunkenly painted “KKK” on Mr. Pride’s car. (Mr. Pride had passed out at a party while trying to match Jones, an alcoholic, drink for drink.)

“In all honesty, it took longer for the Nashville crowd to become accustomed to me than I thought it would,” Mr. Pride recalled in his 1994 memoir, “Pride,” written with Jim Henderson. “I was a novelty, but I never allowed myself to feel out of place. Unless someone else brought it up — that I was different — I tried not to think about it much.”

Charley Frank Pride was born in Sledge, Miss., on March 18, 1934, and was the fourth of 11 children in a family of sharecroppers. His father named him Charl but, because of a clerical error, the “ey” was added to his birth certificate.

Mr. Pride’s fascination with country music began early during his childhood in the Mississippi Delta. Though the region is best known for its blues, his strict and religious father regarded the genre as the devil’s music. Instead, Mr. Pride recalled listening to the Grand Ole Opry and a local country station on the family’s battery-run Philco radio.

“My dad was in charge of the dials on the radio, so that’s what we listened to,” Mr. Pride once said. “In my formative years, country music was what I heard. I got to be 10 or 11 years old before I started listening to other music. By the time I experienced the blues, I was in my teens.”

Mr. Pride bought his first guitar at 14, but baseball competed with music as a consuming passion.

“As far as I was concerned, my future was in baseball,” he wrote in his memoir. “I saw what Jackie Robinson did, that was my goal. Before he reached the major leagues, there were no real role models for kids like us.”

Throughout the 1950s, Mr. Pride pitched for Negro leagues teams, minor league affiliates of major league teams, and occasionally in exhibition games against barnstorming major league players. At one point while he was playing in the Negro leagues, he and a teammate were traded for a used team bus.

The Army drafted Mr. Pride in 1958. After his discharge two years later, he joined Anaconda.

In his memoir, Mr. Pride spoke of struggles with manic depression. He also invested in many failed business ventures. However, his music management company prospered by discovering new talents Ronnie Millsap and Gary Stewart and bringing both to RCA Records. In 2010, he became a minority owner of the Texas Rangers baseball team.

Mr. Pride was voted entertainer of the year by the Country Music Association in 1971. He received a Grammy for his 1971 album, “Charley Pride Sings Heart Songs.” He won additional Grammys at the 1971 ceremony for two gospel songs, “Did You Think to Pray” and “Let Me Live.”

Mr. Pride credited his early experiences with giving him an unflinching determination to succeed.

“When I used to go to school and pledge allegiance to the flag, all those nice words about ‘liberty and justice for all,’ I just had to look out my window: We had to play basketball outside while the whites had a gym,” he told The Post in 1984. “But my mother told me to hang in there, that someday it would be different, and that kept me believing.”