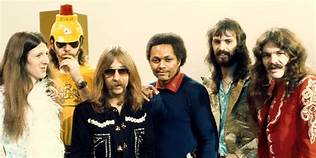 The Doobie Brothers have been around for a while, making great sounds, teaming up with some great writers and proving they are worthy of being Inducted into the Rock and Roll Hall of Fame. “Take Me in Your Arms,’ is one of my favorite songs by this band. As I listen to this song, I am immediately taken back to 1975 when it was released. It was a great song then, and it’s a great song now!

This was written by the famous Motown songwriting team of Lamont Dozier and the brothers Eddie and Brian Holland, who were known as Holland-Dozier-Holland. It was recorded by Kim Weston, who had an R&B hit with the song in 1965; The Isley Brothers also recorded it in 1967. It wasn’t until The Doobie Brothers released their version that the song became a mainstream hit. Doobies lead singer and guitarist Tom Johnston told Songfacts: “I had been a fan of that song since it came out somewhere in the ’60s. I just loved that song. So somewhere around ’72 I started lobbying to get the band to do a cover of that. And I didn’t get anywhere until ’75. Then finally in 1975 we did it. And we got to have some chick singers, which was to me the ultimate nirvana thing to do, come in and sing on the thing with us. And then the strings were put on by Paul Riser, who was the Motown string guy.

I was in hog heaven. I absolutely love that song. And when we got to do it, for me that was a real thrill. I felt not only satisfied but elated. And then to get to go out and play it live as well, that was a kick.”

I know you’re leavin’ me behind
I’m seein’ you darlin’ for the very last time
Show a little tenderness before you go
Please let me feel your embrace once more
Take me in your arms and rock me, rock me a little while
We all must feel heartache sometimes
Right now, right now I’m feelin’ mine
I’ve tried my best to be strong, but I’m not able
I’m like a helpless child left in a cradle
Before you leave me behind let me feel happy one more time
I’m losin’ you and my happiness
My life is do dark I must confess
I’ll never, never see your smiling face no more
I’ll never, never hear your knock upon my door
Before you leave me leave me behind
Let me feel happy one more time

4 thoughts on “The Doobie Brothers – “Take Me in Your Arms””