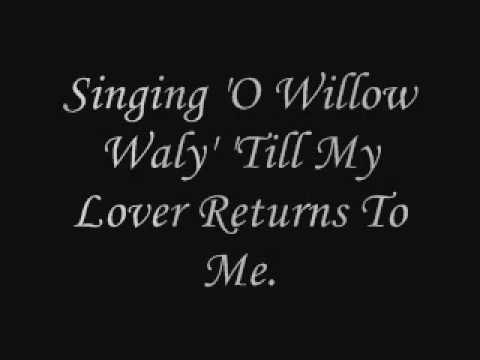 “O Willow Waly” is one of the most beautifully written songs that I have ever heard. It’s a song that if one closes their eyes, they can almost in vision a couple in love lying beneath a beautiful weeping willow tree and at an instant one of them are no longer there and the other is left alone to lie and weep beside the tree. There was no need in using huge words to describe the lovers, the love lost and the broken heart of the one left behind. This song was a great selection and was a perfect fit for the ‘Henry James’ novel, (“Turn of the Screw”) UK adaptation “The Innocents,” This spooky, smart, sassy, yet suspenseful thriller, filled with mystery, intrigue, love and romance is still a great hit to this day! Isla Cameron sings the song in a soft, sweet yet somewhat innocently comforting voice that will make you bury yourself into your sofa under a blanket and settle in to watch this great movie! After seeing this movie, I wanted a music box with that song, so I called around everywhere trying to find one. I finally spoke with a man in a music store that advised me that if I were able to get that song for a music box, due to copywrite, I would probably end up paying somewhere in the amount of $10K. I immediately realized that I can just listen to it on YouTube.
The Kingston Trio released this song on their album “Something Special” in 1962 under the Folk music genre. I personally prefer the theme song by Isla Cameron over the version by the Kingston Trio. I have added both videos so each of you can listen and enjoy both versions.

We lay my love and I beneath the weeping willow.
But now alone I lie and weep beside the tree.