Although Oscar Wilde’s life was riddled with controversy, he was still a great poet. His quotes are still being used to this day. I never knew anything about him growing up, or at least I don’t remember. My love for Ireland and Phil Lynott led me to read about this poet. There is a pretty cool statue of him located in Merrion Square in Dublin, Ireland. Please enjoy the poetry and also famous quote of the late Oscar Wilde. I have read the things he was accused of and the relationship he had with his lover, Lord Alfred Douglas. but I am only focusing on his poetry and one of his many quotes. Wilde left us to cherish many poems as well as great quotes.

“The one duty we owe to history is to rewrite it.” Oscar Wilde

Oscar Fingal O’Flahertie Wills Wilde (16 October 1854 – 30 November 1900) was an Irish poet and playwright. After writing in different forms throughout the 1880s, he became one of London’s most popular playwrights in the early 1890s. He is best remembered for his epigrams and plays, his novel The Picture of Dorian Gray, and the circumstances of his criminal conviction for “gross indecency”, imprisonment, and early death at age 46. Wilde is buried in Pere Lachaise Cemetery.

Wilde’s parents were successful Anglo-Irish intellectuals in Dublin. Their son became fluent in French and German early in life. At university, Wilde read Greats; he proved himself to be an outstanding classicist, first at Trinity College Dublin, then at Oxford. He became known for his involvement in the rising philosophy of aestheticism, led by two of his tutors, Walter Pater and John Ruskin. After university, Wilde moved to London into fashionable cultural and social circles.
Wilde married Constance Lloyd in 1884-1898, they had two sons, Vyvyan Holland and Cyril Holland.

As a spokesman for aestheticism, he tried his hand at various literary activities: he published a book of poems, lectured in the United States and Canada on the new “English Renaissance in Art” and interior decoration, and then returned to London where he worked prolifically as a journalist. Known for his biting wit, flamboyant dress and glittering conversational skill, Wilde became one of the best-known personalities of his day. At the turn of the 1890s, he refined his ideas about the supremacy of art in a series of dialogues and essays, and incorporated themes of decadence, duplicity, and beauty into what would be his only novel, The Picture of Dorian Gray (1890). The opportunity to construct aesthetic details precisely, and combine them with larger social themes, drew Wilde to write drama. He wrote Salome (1891) in French while in Paris but it was refused a license for England due to an absolute prohibition on the portrayal of Biblical subjects on the English stage. Unperturbed, Wilde produced four society comedies in the early 1890s, which made him one of the most successful playwrights of late-Victorian London.

At the height of his fame and success, while The Importance of Being Earnest (1895) was still being performed in London, Wilde had the Marquess of Queensberry prosecuted for criminal libel. The Marquess was the father of Wilde’s lover, Lord Alfred Douglas. The libel trial unearthed evidence that caused Wilde to drop his charges and led to his own arrest and trial for gross indecency with men. After two more trials he was convicted and sentenced to two years’ hard labor, the maximum penalty, and was jailed from 1895 to 1897. During his last year in prison, he wrote De Profundis (published posthumously in 1905), a long letter which discusses his spiritual journey through his trials, forming a dark counterpoint to his earlier philosophy of pleasure. On his release, he left immediately for France, never to return to Ireland or Britain. There he wrote his last work, The Ballad of Reading Gaol (1898), a long poem commemorating the harsh rhythms of prison life. He died destitute in Paris at the age of 46.

De Profundis (Latin: “from the depths”) is a letter written by Oscar Wilde during his imprisonment in Reading Gaol, to “Bosie” (Lord Alfred Douglas).

In its first half Wilde recounts their previous relationship and extravagant lifestyle which eventually led to Wilde’s conviction and imprisonment for gross indecency. He indicts both Lord Alfred’s vanity and his own weakness in acceding to those wishes. In the second half, Wilde charts his spiritual development in prison and identification with Jesus Christ, whom he characterizes as a romantic, individualist artist. The letter began “Dear Bosie” and ended “Your Affectionate Friend”.

Wilde wrote the letter between January and March 1897, close to the end of his imprisonment. Contact had lapsed between Douglas and Wilde and the latter had suffered from his close supervision, physical labor, and emotional isolation. Nelson, the new prison governor, thought that writing might be more cathartic than prison labor. He was not allowed to send the long letter which he was allowed to write “for medicinal purposes”; each page was taken away when completed, and only at the end could he read it over and make revisions. Nelson gave the long letter to him on his release on 18 May 1897.

Wilde entrusted the manuscript to the journalist Robert Ross (another former lover, loyal friend, and rival to “Bosie”). Ross published the letter in 1905, five years after Wilde’s death, giving it the title “De Profundis” from Psalm 130. It was an incomplete version, excised of its autobiographical elements and references to the Queensberry family; various editions gave more text until in 1962 the complete and correct version appeared in a volume of Wilde’s letters.

A VISION –
Two crowned Kings, and One that stood alone
With no green weight of laurels round his head,
But with sad eyes as one uncomforted,
And wearied with man’s never-ceasing moan
For sins no bleating victim can atone,
And sweet long lips with tears and kisses fed.
Girt was he in a garment black and red,
And at his feet I marked a broken stone
Which sent up lilies, dove-like, to his knees.
Now at their sight, my heart being lit with flame,
I cried to Beatrice, ‘Who are these? ‘
And she made answer, knowing well each name,
‘AEschylos first, the second Sophokles,
And last (wide stream of tears!) Euripides.’

Apologia –
IS it thy will that I should wax and wane,
Barter my cloth of gold for hodden grey,
And at thy pleasure weave that web of pain
Whose brightest threads are each a wasted day?
Is it thy will–Love that I love so well–
That my Soul’s House should be a tortured spot
Wherein, like evil paramours, must dwell
The quenchless flame, the worm that dieth not?
Nay, if it be thy will I shall endure,
And sell ambition at the common mart,
And let dull failure be my vestiture,
And sorrow dig its grave within my heart.
Perchance it may be better so–at least
I have not made my heart a heart of stone,
Nor starved my boyhood of its goodly feast,
Nor walked where Beauty is a thing unknown.
Many man hath done so; sought to fence
In straitened bonds the soul that should be free,
Trodden the dusty road of common sense,
While all the forest sang of liberty,

Not marking how the spotted hawk in flight
Passed on wide pinion through the lofty air,
To where the steep untrodden mountain height
Caught the last tresses of the Sun God’s hair.

Or how the little flower he trod upon,
The daisy, that white-feathered shield of gold,
Followed with wistful eyes the wandering sun
Content if once its leaves were aureoled.

But surely it is something to have been
The best belovèd for a little while,
To have walked hand in hand with Love, and seen
His purple wings flit once across thy smile.

Ay! though the gorgèd asp of passion feed
On my boy’s heart, yet have I burst the bars,
Stood face to face with Beauty, known indeed
The Love which moves the Sun and all the stars!

Her Voice –
THE wild bee reels from bough to bough
With his furry coat and his gauzy wing.
Now in a lily-cup, and now
Setting a jacinth bell a-swing,
In his wandering;
Sit closer love: it was here I trow
I made that vow,
Swore that two lives should be like one
As long as the sea-gull loved the sea,
As long as the sunflower sought the sun,–
It shall be, I said, for eternity
‘Twixt you and me!
Dear friend, those times are over and done,
Love’s web is spun.
Look upward where the poplar trees
Sway and sway in the summer air,
Here in the valley never a breeze
Scatters the thistledown, but there
Great winds blow fair
From the mighty murmuring mystical seas,
And the wave-lashed leas.
Look upward where the white gull screams,
What does it see that we do not see?
Is that a star? or the lamp that gleams
On some outward voyaging argosy,–
Ah! can it be
We have lived our lives in a land of dreams!
How sad it seems.
Sweet, there is nothing left to say
But this, that love is never lost,
Keen winter stabs the breasts of May
Whose crimson roses burst his frost,
Ships tempest-tossed
Will find a harbor in some bay,
And so we may.
And there is nothing left to do
But to kiss once again, and part,
Nay, there is nothing we should rue,
I have my beauty,–you your Art,
Nay, do not start,
One world was not enough for two
Like me and you. 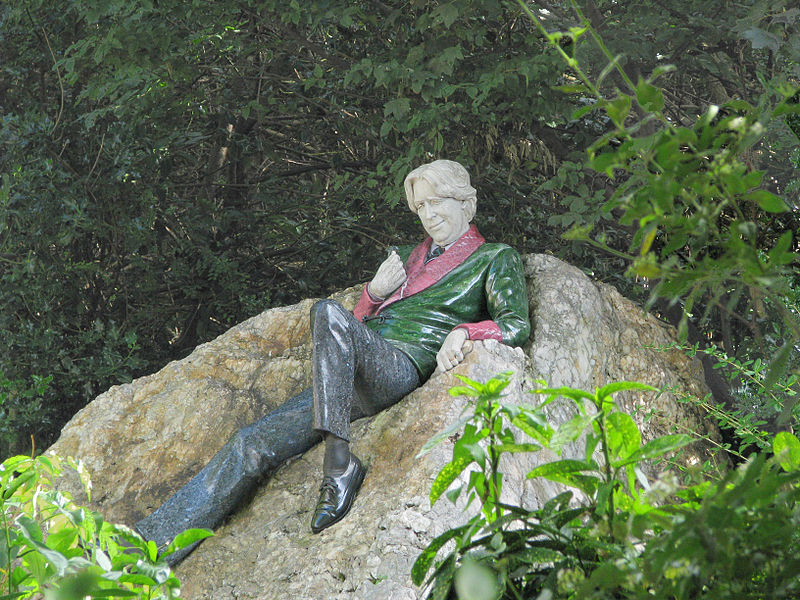 View all posts by

7 thoughts on “The Beautiful Poetry of Oscar Wilde – Poets Who Inspire!”