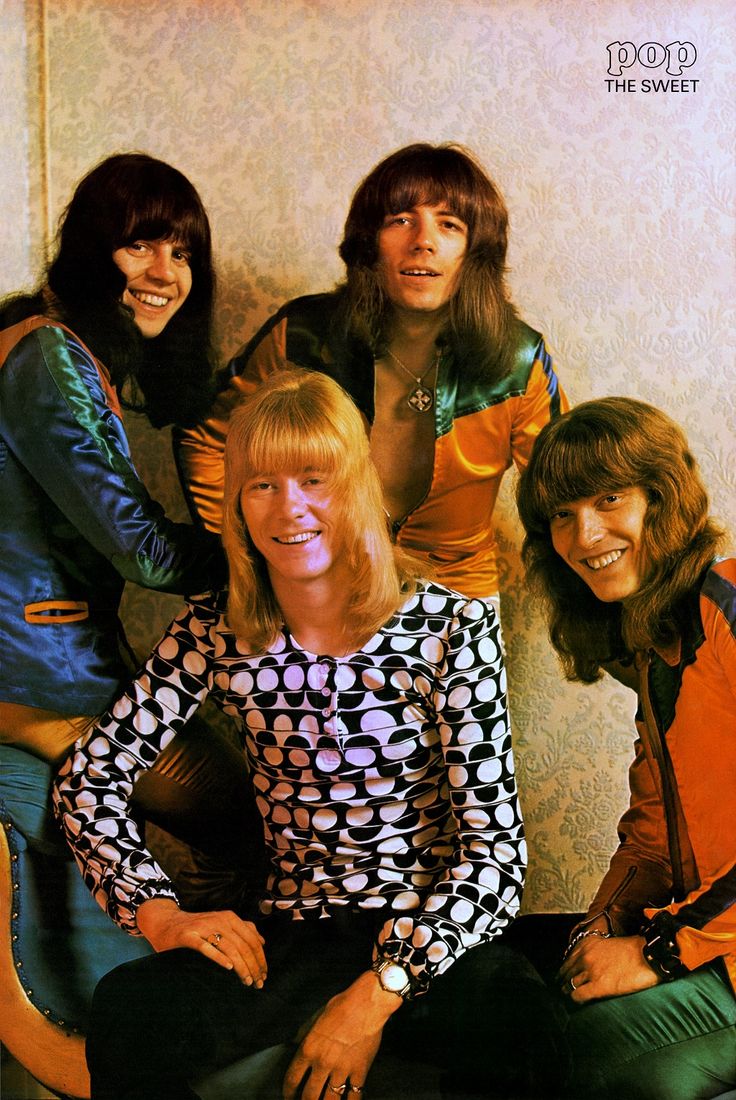 This is just one of the great British bands who not only captured the hearts and minds of teens in the UK, but also in the USA.  With hits like Love is like Oxygen, Ballroom Blitz, Little Willy & Fox on the Run, they were every girls dream and the music is just timeless. Their music brings back such happy memories of my teen years spent at the Teen Center with my dear friends in our small west Texas town of only a little over 5000 people.  Such sweet memories that I truly miss on a daily basis!

The band was formed in London in 1968 and achieved their first hit, “Funny Funny”, in 1971 after teaming up with songwriters Nicky Chinn and Mike Chapman and record producer Phil Wainman. During 1971 and 1972, their musical style followed a marked progression from the Archies-like bubblegum style of “Funny Funny” to a Who-influenced hard rock style supplemented by a striking use of high-pitched backing vocals.

The band first achieved success in the UK charts, with thirteen Top 20 hits during the 1970s alone, with “Block Buster!” (1973) topping the chart, followed by three consecutive number two hits in “Hell Raiser” (1973), “The Ballroom Blitz” (1973) and “Teenage Rampage” (1974). The band turned to a more hard rock style with their mid-career singles, like 1974’s “Turn It Down”. “Fox on the Run” (1975) also reached number two on the UK charts. These results were topped in West Germany and other countries on the European mainland. They also achieved success and popularity in the US with the top ten hits “Little Willy”, “The Ballroom Blitz”, “Fox on the Run” and “Love is Like Oxygen”.

Sweet had their last international success in 1978 with “Love Is Like Oxygen”. Connolly left the group in 1979 to start a solo career and the remaining members continued as a trio until disbanding in 1981. From the mid-1980s, Scott, Connolly and Priest each played with their own versions of Sweet at different times. Connolly died in 1997 and Tucker in 2002. The two surviving members are still active in their respective versions of the band; Scott’s is based in the UK and Priest’s in the US.

the deaths of Brian Connolly and Mick Tucker

Steve Priest was asked to join Tucker and Scott for the 1985 Australian tour, but declined at the last moment.

Mike Chapman contacted Connolly, Priest, Scott, and Tucker in 1988, offering to finance a recording session in Los Angeles. As he remembers: “I met them at the airport and Andy and Mick came off the plane. I said, ‘Where’s Brian?’ They said, ‘Oh, he’s coming.’ All the people had come off the plane by now. Then this little old man hobbled towards us. He was shaking and had a ghostly white face. I thought, ‘Oh, Jesus Christ.’ It was horrifying.” Reworked studio versions of “Action” and “The Ballroom Blitz” were recorded, but it became clear that Connolly’s voice and physical health had made Sweet’s original member comeback too difficult to promote commercially. Consequently, the reunion attempt was aborted.

In 1990 this line-up was again reunited for the promotion of a music documentary entitled Sweet’s Ballroom Blitz. This UK video release, which contained UK television performances from the 1970s and current-day interviews, was released at Tower Records, London. Sweet was interviewed by Power Hour, Super Channel, and spoke of a possible reunion.

Brian Connolly died at the age of 51 on 9 February 1997 from liver failure and repeated heart attacks, attributed to his abuse of alcohol in the 1970s and early 1980s. Mick Tucker subsequently died on 14 February 2002 from leukemia, at the age of 54.

To read more on this great band, please follow the link at: https://en.wikipedia.org/wiki/The_Sweet